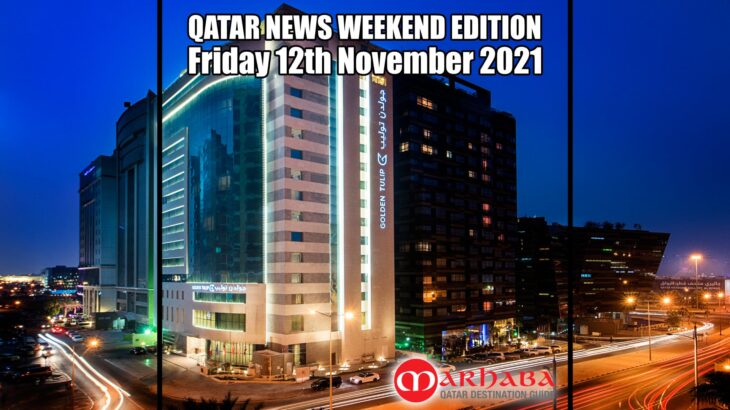 A recap of Qatar’s big news stories for the week up to Friday 12th November. Brought to you in conjunction with Marhaba, the ultimate guide to Qatar.

Starting with last Sunday when Health Insurance should be valid for the entire duration of an RP was the headline of the Qatar Tribune.

Health insurance, which will become mandatory for expatriates and visitors in Qatar in a few months, will have to be valid for the entire duration of their residence permit or their entry visa.
Once the law comes into force in around 6 months, expatriates will not be able to get visas, renew their residency permits or get appointed in a job without having health insurance.

Onto Monday now and in the Qatar Tribune is the story that Qatar has no plans to impose income tax says the General Tax Authority president.
And he also says that the value added tax or VAT, which is set to be introduced in the future, is still under legislation, but Qatar has no reservations in rolling out the regime.

Wednesday and the Gulf Times say that the Economic and Cyber Crimes Combating Department of the General Directorate of Criminal Investigation has detained a government employee for posting an official document on social media.

Yesterday and Qatar Tribune say that the cabinet has decided to continue existing COVID-19 measures for the present.

And in this morning’s news the Hamad International Airport expansion is to be completed by September 2022 the Qatar Airways Group Chief Executive Akbar al-Baker said “we are going to increase the annual capacity of the airport by 20 million passengers to cater to over 58 million passengers”.

A minimum salary of 5,000 Qatar riyals is needed to apply for a visit visa for a spouse or children. This rises to 10,000 for other family members including relatives such as parents’, siblings, and a spouse’s relatives.

And finally, the sale of local vegetables has started at four yards. The yards will be open every Thursday, Friday, and Saturday from 7am until 3pm. I may well pop down their myself today.

GOLDEN TULIP HOTEL
The Golden Tulip Doha hotel is part of a global group that has a reputation for delivering a high-quality experience at reasonable prices. Enabling you to book your reservation with confidence. I found the rooms to be large and airy with plenty of space to settle in. And just look at that bed.

Why not treat yourself and the one you love to a bit of room service. Start your day with a touch of luxury and indulge in a tasty breakfast right here in your room.
And of course, the table wouldn’t be set without their symbol of excellence, a golden tulip.

If you’re staying a bit longer, or need that extra bit of room, why not consider a one-bedroom apartment.

For work or for pleasure you get a large en suite bedroom with a massive luxury bed.

And a living area with a fully fitted kitchen, complete with dining area.
And for extra guests that’s a sofa bed that’s so comfortable to sleep on you’ll forget it’s a convertible.

Hamad International Airport is only 11km away, and the location is one of the best if you’re into culture. In just a short walk you can be in The National Museum of Qatar, The Museum of Islamic Art or Souq Waqif along with parks and many more of Qatar’s must-see attractions.

There’s a fully equipped gym complete with trainer, a spa and a roof top pool. A modern conference room, and the sumptuous Symphony restaurant.

The Golden Tulip is a fun and friendly hotel that will have you coming back time and time again.