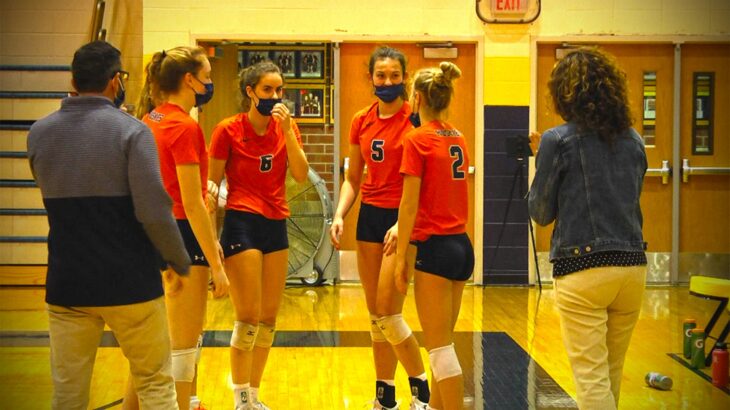 Naperville North girls volleyball clashes Neuqua Valley where the Huskies win in a competitive match. This highlight is sponsored by BMO Harris Bank.

Out to 95th street to Neuqua Valley where the Wildcats play host to Naperville North and the Huskies for a DVC girls volleyball clash. Both these squads are tuning up for their date in the St. Charles East tournament this weekend. North was victorious in their previous matchup against Waubonsie Valley and Neuqua looking to continue their streak of two DVC wins in a row.

We start early in the first set, where Bryanna Jones of Neuqua blocks the kill attempt of North’s Natalie Corcoran to make it a 5-3 lead for NV.

A little later on in the set, the Huskies battled back to even, but pull ahead when this kill shot from Jones goes wide right.

North keeps rolling in the first when they deny access to the Wildcats attack. Kara Oxenknecht rises up to smash home the hard-earned point for the blue and orange and they lead by five.

After a timeout, Neuqua scores five straight to knot it at 14. That run is capped off by this ace from Jones.

The two squads go back and forth until they level out at 19, but North pulls away winning set one 25-22 when Alison Hoffman hits the net on the kill attempt.

We move ahead in the second set. The Huskies jump out to an 8-4 lead when Shelby Erickson dunks it past the Neuqua defense.

The Wildcats claw back to a one-point deficit when Hoffman’s return is too much to handle for Natalie Corcoran.

Now trailing 17-12, Neuqua needs a run and Nicolette Fuglestad delivers by grabbing five straight points, capped off by this ace.

But the Huskies take control again by getting a 21-17 advantage on this Herculean smash from Paige Lauterwasser.

Match point here, Neuqua Valley thinks they’ve survived another serve, but the officials rule the ball out of bounds so Naperville North pulls off the win in straight sets 25-22, 25-19.